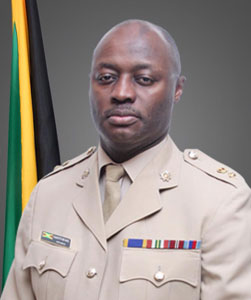 Lieutenant Colonel Maurice Anthony MATTHEWS joined the Jamaica Defence Force in July 1992. After completing basic recruit training and a Young Officer Orientation Course at the JDF Training Depot in Newcastle, he embarked on his commissioning course at the Commando Training Centre Royal Marines in the United Kingdom.

Lieutenant Colonel MATTHEWS has held a number of appointments over the period of his service, including Platoon Commander, Engineer Troop Commander, Engineer Squadron Commander, Projects Officer, as well as Operations Officer of the Engineer Regiment, Directing Staff at the Caribbean Junior Command and Staff College, Battalion Second in Command, Acting Assistant Inspector General, Training Major, SO1 J5 (Strategy, Plans and Policy), Commanding Officer Combat Support Battalion, SO1 J2/J3 (Intelligence and Operations), Executive Officer Support Brigade and his current post of Vice President (Administration) of the Caribbean Military Academy. As a Platoon Commander, he was a member of the JDF and CARICOM Contingent that operated as part of the United Nations Mission in Haiti (UNMIH) over the period March to September 1995.

His principal military training courses have been the Royal Marines Young Officer Course in the UK, the Caribbean Junior Command and Staff Course, the Engineer Captains’ Career Course in Missouri, USA and the Senior Command and Staff College and the Marine Corps University in Virginia, USA. He has also done a number of conferences/seminars on subjects including Peacekeeping, International Military Operations, Disaster Response, and Regional Security.

Lieutenant Colonel Maurice MATTHEWS is a recipient of Meritorious Service Medal and the Jamaica Military Commendation Medal for Excellence. He has also been awarded the General Service Medal for operational service in Haiti and in Jamaica, the United Nations Medal for operational service in Haiti, the Medal of Honour for Long Service and Good Conduct, and the Queens Diamond Jubilee Medal. A past student of Cornwall College, Lieutenant Colonel MATTHEWS holds a Diploma in Quantity Surveying, a Bachelors Degree in Construction Engineering and Management and a Master of Military Studies Degree. He is a sports enthusiast who mostly enjoys track and field athletics and football.