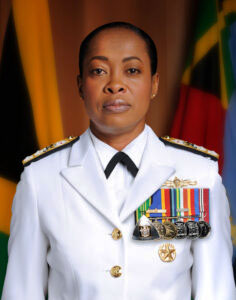 Rear Admiral Antonette Wemyss Gorman is a career Officer with the Jamaica Defence Force, (JDF) whose twenty-nine (29) years of service has been characterized by ground breaking achievements, exceptional command and an indomitable spirit. She is the first woman to serve as Chief of Defence Staff (CDS) for the Jamaica Defence Force (JDF). She was officially appointed to the position on January 20, 2022 which also resulted in her becoming the second woman in history to command a national army and the only current female Army Chief.

In January 2020, She assumed the post of Force Executive Officer (FXO) with the responsibility to provide strategic guidance to the Force in support of the transformational vision of the then Chief of Defence Staff. As the FXO, she formulated and directed Force policies whilst coordinating all the Staff Branches responsible for the daily operation of the Force.

Admiral Wemyss Gorman has served the JDF distinguishably in several capacities. Her excellence in service and management resulted in her becoming the first and only woman to attain a Flag Rank. Her aptitude to embrace efficiency and break barriers was also evidenced in her roles as Brigade Commander, Maritime Air and Cyber Command (2018/19) and Commanding Officer of the Coast Guard (2013/18). Of note is the role she played in the establishment of the Caribbean Maritime Military Training Centre (CMMTC) along with the development of the core courses offered at the Centre. Under her tenure hundreds of officers, locally and regionally have become proficient in Military Maritime Operations. She has also served as Technical Director of Marine Transport in the Ministry of Public Utilities and Transport (1998/2000).

She is a Subject Matter Expert representing Jamaica at the International Seabed Authority, Maritime Expert on the National Negotiating Team with regards to Delimitation of Maritime Boundaries (Jamaica- Honduras) and the Jamaican representative on the Caribbean Basin Security Initiative Maritime and Aerial Domain Technical Working Group. Since 2019, she is the Force lead on all bi-lateral partnerships with major defence organizations in the United Kingdom, the United States of America and Canada. She is also the Force lead and Chief Editor of the Strategic Defence Review for 2017 – 2037.

She is a distinguished alumni of the US Naval War College and holds a Master’s Degree with distinction in National Security and Strategic Studies from the University of the West Indies, Mona.